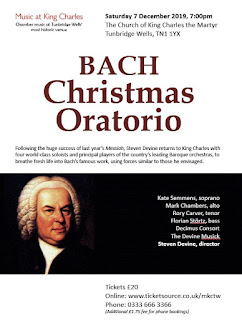 All advance tickets are now sold. However, there are plenty of seats in the galleries, with restricted view. Tickets for these seats only will be available on the night.

As the church will be full, do arrive in good time to allow for local traffic and parking.

Pentagon String Ensemble have performed together for many years. Individually the members have performed as Principal players with orchestras including London Philharmonic Orchestra, Royal Philharmonic Orchestra, Philharmonia Orchestra, Northern Sinfonia and the Academy of St Martin in the Fields and as chamber musicians they have collaborated with such artists as Alfred Brendel, Thomas Zehetmair, Heinz Holliger, Christian Zacharias, the Soloists of the Philharmonia and the Soloists of the LPO. 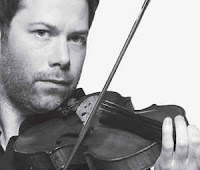 Tristan Gurney enjoys a wide-ranging career as a director, soloist, chamber and orchestral violinist. He established himself on the British chamber music scene as leader of the Edinburgh Quartet (2007-2016). During his time with the quartet, Tristan collaborated with many esteemed artists such as harpist Isobelle Moretti, tenor Andrew Staples, clarinetist Maximilliano Martin and flautist Juliette Bausor and worked closely with composers such as Sir James Macmillan, Sir Peter Maxwell Davies, Helen Grime, Tom Harrold and Howard Blake. The Edinburgh Quartet released several CDs with Tristan, including, recordings of Matyas Seiber Quartets, Robert Crawford Quartets and Haydn, Shostakovich and Prokofiev Quartets all to great acclaim. Their disc of Sir James MacMillan String Quartets was awarded a ‘Critics Choice’ and included in the list of best recordings of 2014 in Gramophone Magazine. Tristan is currently the Curator of Chamber Music at Sage Gateshead. In addition to programming, it is a role that draws on his Chamber Music expertise, joining his friends and colleagues at Royal Northern Sinfonia as a director, soloist and chamber player. Tristan combines his responsibilities at Sage Gateshead with a flourishing freelance career, regularly collaborating with chamber music colleagues and guesting as a principal player with orchestras such as the London Philharmonic, Royal Philharmonic, Philharmonia, Academy of St Martin in the Fields and Scottish Chamber Orchestra. He is also Principal Second of Scottish Ensemble which performs at prestigious venues and festivals worldwide and has a regular series at Wigmore Hall, London. Tristan studied the violin at the Royal Nothern College of Music with Yossi Zivoni and then at the Royal Conservatory of Music, Toronto with Lorand Fenyves and plays on a Ferdinand Gagliano Violin. 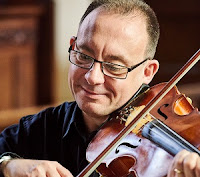 Martin Bloor studied at the Royal Northern College of Music and as a student was the recipient of the Rachel Godlee Memorial Prize for Viola as well as being awarded many prizes for chamber music performances. Upon graduating he took up a position with the Royal Liverpool Philharmonic Orchestra. This was followed by an appointment as Sub-Principal viola of Northern Sinfonia. During his time at the orchestra he was involved in frequent chamber music projects with Principal members of the orchestra as well as with such artists as Heinz Holliger, Thomas Zehetmair and Ruth Killius including performances in the Proms at the Royal Albert Hall. He also performed as soloist with the orchestra. Since leaving Northern Sinfonia in 2007 he has led a busy and diverse career based in London. He has played Guest Principal with orchestras including RTE Dublin, London Concert Orchestra, London Musical Arts Orchestra, Mozart Festival Orchestra, Lancashire Sinfonietta and BBC National Orchestra of Wales in venues i ncluding the Barbican, Royal Festival Hall, Royal Albert Hall and St. Martin in the Fields as well as performing with the Philharmonia and Royal Philharmonic Orchestras. Recent solo performances have included Bach’s Brandenburg Concerto No.6 with Brighton Philharmonic Orchestra and performances with the Soloists of The Philharmonia. More recently he has combined chamber music with teaching commitments. 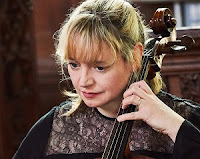 Rachel Threlfall studied the cello with Leonard Gorokhov at the Royal College of Music and performed in master classes with Stephen Isserlis, Ralph Kirshbaum and Raphael Wallfisch. Since graduating in 2002 Rachel has pursued a busy freelance career in London. She has worked regularly with a variety of ensembles and orchestras including The Royal Philharmonic Orchestra, The London Philharmonic Orchestra, BBC Concert Orchestra and Bournemouth Symphony Orchestra. Rachel toured for several years with English Touring Opera and the Carl Rosa Opera Company and in small opera productions involving solo string sections. As a chamber musician Rachel has performed in some of the UKs most prestigious venues including St Martin in the Fields, Queen Elizabeth Hall, St James Piccadilly, National Gallery and the music room at the V&A museum. Rachel performed the world premiere performance of Nicola Moro composition War, eight poems by Harold Pinter performed by 2 voices, five solo Cellos and Piano. She has also performed in art exhibitions including collaborating with contemporary artist Martin Creed. As a recording artist Rachel’s solo projects have included several recordings for BBC Radio, including collaborating with playwright Joanna Lawrence for Radio 3’s “The Wire” and appeared as solo cello on the soundtrack to BBC Radio 4’s production of Les Miserables. She has also been involved in several recording sessions for pop artists, TV adverts and computer games As well as pursuing an active performance career Rachel has been able to balance her teaching commitments having taught cello from beginner to professional standard. She has held a teaching post at Stowe School and currently teaches the cello at Lady Margaret’s School, Chelsea. She has been involved in educational projects with the Royal Philharmonic Orchestra and Philharmonia. Rachel performs on a George Crask cello.

King Charles church is absolutely the perfect venue for chamber music. Players love coming here, and invariably remark on the beauty of the acoustic, as well as the building itself, and the warm welcome they receive.

Chamber music is what we do best. And there are two fantastic opportunities coming up to experience, close up, some musicians of the very highest calibre. 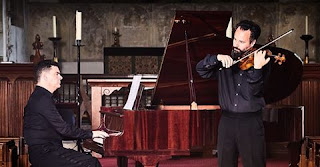 Saturday 19 October, 7:30pm
Joseph Wolfe and Anthony Zerpa-Falcon Violin and piano recital.
Mozart Sonata in G K.301, Brahms Sonata in A Op.100, Kodaly Adagio, Beethoven Sonata in C minor Op.30 no.2
The Wolfe/Zerpa-Falcón Duo have been collaborating for many years, producing inspirational performances of masterworks for violin and piano at the highest level. With an extensive repertoire ranging from Bach to Shostakovich, the duo have become renowned for a high degree of detail, intricately woven soundscapes allied with technical brilliance. Watch a video of the duo here.

Buy tickets at www.ticketsource.co.uk/mkctw in advance and save money on the full price.
Posted by Rupert P Bell at 16:26 No comments: 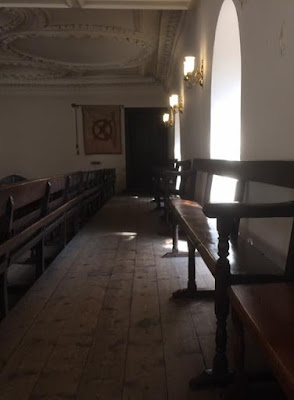 Saturday 19 October, 7:30pm
Joseph Wolfe and Anthony Zerpa-Falcon Violin and piano recital.
Mozart Sonata in G K.301, Brahms Sonata in A Op.100, Kodaly Adagio, Beethoven Sonata in C minor Op.30 no.2
The Wolfe/Zerpa-Falcón Duo have been collaborating for many years, producing inspirational performances of masterworks for violin and piano at the highest level. With an extensive repertoire ranging from Bach to Shostakovich, the duo have become renowned for a high degree of detail, intricately woven soundscapes allied with technical brilliance. Watch a video of the duo here.

Saturday 7 December, 7:00pm
Bach: Christmas Oratorio
Not to be missed. We are extremely excited that Steven Devine will return to King Charles with the singers and players from last year's unforgettable performance of 'Messiah'. (Please note start time.) Steven Devine is now in demand across the world and is at home in the fields of opera, large-scale concerts, chamber music and solo performances. As well as many other posts, he is Co-Principal keyboard player with the Orchestra of the Age of Enlightenment.

All tickets at www.ticketsource.co.uk/mkctw with discounts for advance booking
Posted by Rupert P Bell at 21:41 No comments:

Cantabile at the National Liberal Club 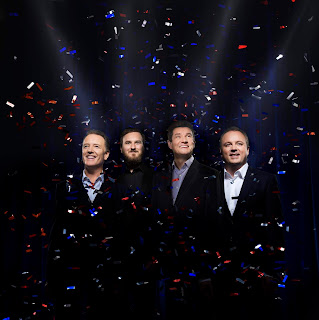 We are delighted to have arranged a concert at this special venue, conveniently near Charing Cross station for those travelling from Tunbridge Wells, featuring the wonderful ensemble, Cantabile - The London Quartet.

Their sparkling programme runs for one hour from 6:45pm, allowing time for dinner after the show, and the bar will be open beforehand from 6pm. 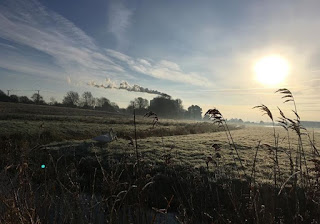 A feast of English songs with Ellen Smith (soprano) and Paul Clark (piano), and the famous 'Serenade to Music' by Vaughan-Williams, celebrating the Queen's official Birthday.

Ellen Smith and Paul Clark present a sequence of songs by Purcell, Quilter, Gurney, Ireland, Warlock and others, followed by the 'Serenade to Music', a work that moved Rachmaninov to tears at its première.

Composed for 16 solo voices and orchestra, this smaller-scale performance will feature 12 soloists and piano quintet. The players are: Marie-France Ouellet and Jane Gomm (violins), Martin Bloor (viola) and Ruth Beedham (cello), with members of the King Charles Singers and directed by Rupert Preston Bell.

Ellen Smith was a postgraduate Early Music MMus student at the Guildhall School of Music & Drama, having studied classics at University College London. She is in demand as both singer and harpist at many locations throughout London and Southern England, for concerts and private functions, particularly wedding ceremonies and receptions.

"Come ho! and wake Diana with a hymn; With sweetest touches pierce your mistress' ear, And draw her home with music."

Here's what we are looking forward to in 2019 in Music at King Charles. Tickets for all events will be available at https://www.ticketsource.co.uk/mkctw.

Saturday 8 June, 7:30pm
Serenade to Music
A feast of English song with Ellen Smith (soprano) and Paul Clark (piano), as well as Vaughan-Williams' famous 'Serenade to Music', performed by a specially convened group of solo singers accompanied by piano quintet.

We look forward to welcoming old friends and new supporters of our series - chamber music of the highest quality at Tunbridge Wells' most historic venue.

Please also look out for concerts by CODA, the excellent chamber music series based at Rose Hill School: www.codetw.co.uk.

Trio Lavolta was formed in 1995 and made its debut at Blackheath Concert Halls with a programme that included a new work commissioned for the occasion. Since then the trio has given recitals at many of the City of London churches and at music clubs throughout the country. The trio aims to offer innovative programmes of lesser known and contemporary works alongside the standard repertoire.

The trio has also developed a series of programmes of words and music in collaboration with actors, Louise Jameson and David Warwick. The first of these, ‘A private view of Christina Rossetti’; was performed at Trinity Arts Centre in Tunbridge Wells. It included specially commissioned music for the poem ‘Goblin Market’. Other programmes in this series exploring the juxtaposition of words and music are ‘The Seven Ages of Man’ based on the famous speech from Shakespeare’s ‘As You Like It’; ‘Lest We Forget’; ‘A Christmas Carousal’, performed at Finchcocks and ‘Victorian Variety’, performed as part of the Richard Burnett Heritage Collection’s concert series.

Sadly, the founder pianist of the trio, Sally Mays, passed away in April 2018. Felix and Joyce are grateful to Simon Marlow for agreeing to join the trio.

Future plans include a ‘Mr and Mrs Schumann’ programme, which will be performed for the Richard Burnett Heritage Collection in Tunbridge Wells on October 20 2019 to commemorate the 200 th anniversary of Clara Schumann’s birth.
Posted by Rupert P Bell at 11:44 2 comments:

Concert at the National Liberal Club

We've arranged a recital in London for followers of concerts at King Charles. It's close to Charing Cross station, at the historic National Liberal Club, 1 Whitehall Place, SW1A 2HE.

There's a cash bar from 6:15pm, and the recital will be over by 8pm. Limited number of tickets remaining. Booking information.
Posted by Rupert P Bell at 09:22 No comments:

About Music at King Charles