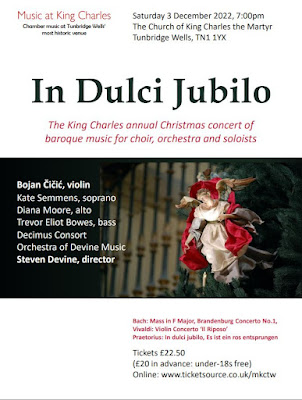 One of the world's leading baroque violinists, Bojan Čičić, joins director and harpsichordist Steven Devine for a programme of music by Vivaldi, Praetorius and Bach, with the Decimus Ensemble and the Orchestra of Devine Music – principal players of the Orchestra of the Age of Enlightenment, The Academy of Ancient Music and others.

This concert has been an exciting feature of the Christmas celebrations at King Charles, Tunbridge Wells’ oldest building, for several years now and is always very popular.

Steven Devine, known to many in the area through his many years of work at the Finchcocks Musical Museum, said: “This is absolutely one of my favourite concerts of the year. I’m lucky enough to be able to involve some brilliant players from groups I work with, and we enjoy ourselves so much that every one of them asks to come back each time.

“The setting is just perfect. An intimate baroque church with a wonderful acoustic, and the audiences are wonderful! The ovation at the end of our first concert, when we performed Handel’s Messiah in 2018, was the most spontaneously exciting response I’ve ever witnessed in this country. This year I’m thrilled to involve Bojan Čičić as soloist - for me, he’s got to be one of the finest violinists around.”

Rupert Preston Bell, director of music at King Charles the Martyr, has been promoting concerts of chamber music at the church since 2006. He said: “We’re very lucky to have these musicians coming to Tunbridge Wells, and their excitement is infectious. The church was built in the baroque period and is the perfect venue for this exciting and life-affirming music.”

Posted by Rupert Preston Bell at 16:16 No comments: 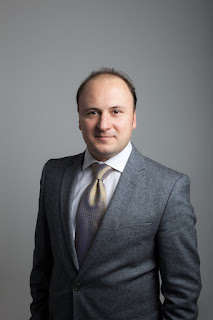 We are very excited to announce that violinist Bojan Čičić will be playing in our annual Baroque concert at King Charles, directed by Steven Devine, on 3 December.

Bojan is the leader of the Academy of Ancient Music and the ensemble Florilegium, and Professor of Baroque Violin at the Royal College of Music. He is frequently invited to lead orchestras such as the Orchestra of the 18th-century, Concerto Copenhagen, or the Orchestra of the Age of Enlightenment.

His recording of J.S. Bach’s Concerto for Two Violins with Rachel Podger was named the best available recording of the work by BBC Music Magazine.

Find out more about him at his website, where you can also find video recordings to watch. http://www.bojancicic.com/

Tickets for the concert are available here https://www.ticketsource.co.uk/mkctw/t-xmdayga

Posted by Rupert Preston Bell at 17:01 No comments: 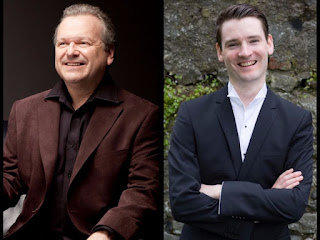 It's a great privilege to welcome back these two wonderful Wigmore Hall artists, bringing their magical playing to a programme of Stanford (Sonata), Poulenc (Sonata), Finzi (Bagatelles) and a tribute to the late Joseph Horowitz (Two Majorcan Pieces/ Sonatina).

Chamber music of this prestigious quality is hard to come by outside top venues in London. We're very excited.

About the programme: Michael McHale in conversation with Michael Waggett

MW: It’s a joy to have the Collins/McHale duo at King Charles!

MM: And always a joy for us too. We very much like performing in such a beautiful church with its lovely ambience and good acoustics - and always helped by the great local audience!

MW: Your thoughts when putting together this programme?

MM: We wanted to present a mix of masterworks by great composers for clarinet and piano and combine those with works that aren’t performed quite so often but which are all really fantastic pieces of music

MM: Stanford was born in Dublin. He went on to become a titan of Anglican church music and a leading figure in British music and education with positions at Cambridge and the RCM in London. His students included Vaughan Williams, Howells, Bliss and Holst. Though his chamber music is influenced by Brahms he never forgot his Irish roots, as is evident in the sonata’s second movement which evokes an Irish lament and is subtitled “Caoine”.

MW: Next that great sonata for clarinet and piano by Poulenc

MM: This sonata is one of the finest in the repertoire, full of Poulenc’s sparkling and witty melodic writing in the outer movements, and deeply lyrical and touching in the central Romanza. It is always a joy for us to perform this work!

MW: After the interval you are playing the five bagatelles by Finzi in honour of a much loved mayor of Tunbridge Wells, the late Julian Stanyer, whose widow Annie will be with us.

MM: We both remember vividly our concert to celebrate the Twinning anniversary in 2019 and, having been unavailable last year, Michael Collins would like to remember Julian on this first anniversary of his passing by playing one of Julian‘s favourite pieces of music.

MW: The concert concludes with Joseph Horowitz and his Two Majorcan Pieces and Sonatina

MM: We wanted to pay a tribute to Joseph Horowitz, who died earlier this year aged 95. He had an incredible life, fleeing Vienna with his family as an Austrian Jew in 1938 and emigrating to England where he worked for decades at the RCM. It was there that Michael Collins met him as a teenage student in his theory class, and he would often come along to our recitals at Wigmore Hall – a truly lovely man and a supremely talented composer.

Posted by Rupert Preston Bell at 22:07 No comments:

Great to know that two of the country's most highly-acclaimed tenors can be heard on our doorstep in the next couple of weeks!

You can hear Mark Padmore at All Saints Church, Tudeley on Thursday 29 September, and James Gilchrist at King Charles the Martyr on Friday 7 October.

Mark Padmore at Tudeley, 29 September
Tickets here
One of the world’s great singers Mark Padmore CBE, performs with guitar virtuoso Morgan Szymanski in the unique setting of All Saint’s Tudelely with its stunning Marc Chagall windows. Songs by Dowland and Schubert performed alongside new works by Stephen McNeff and Alec Roth.

Posted by Rupert Preston Bell at 09:43 No comments:

Concerts in and around Tunbridge Wells this autumn 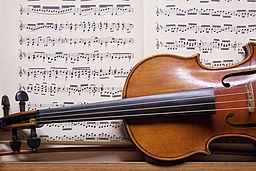 Posted by Rupert Preston Bell at 09:16 No comments:

Live music has made a fantastic comeback after Covid lockdowns, and our autumn season will be something to savour!
Book tickets here

Attending a performance of this, Schubert's most famous song cycle, is an unforgettable experience. And we are very fortunate to welcome a duo whose interpretation is widely considered one of this generation's most definitive. Hear an extract on YouTube

"He is now unsurpassed amongst lyric tenors in sweetness and technical security, and for his musical intelligence" The Independent

"It is a profoundly considered reading, considered enough for some songs to be as penetrating as in almost any performance I have heard...I shall certainly treasure this disc as one of the indispensable readings, and also one of the best balanced between the two partners." BBC Music Magazine

We're thrilled to welcome back these two Wigmore Hall regulars, for what will be an absolutely top class concert - programme to be announced.

Also principal conductor the City of London Sinfonia, Michael Collins is known as one of the world's greatest clarinettists. Michael McHale is one of Ireland's leading pianists, and the duo have been performing together for over a decade. See them at Wigmore Hall on YouTube.

To be first in the queue for future ticket information, email us to join our mailing list.

Posted by Rupert Preston Bell at 18:49 No comments:

Delighted that our "The heavans are telling" concert raised enough money to send £625 to the Red Cross Ukraine appeal. Thank you to everyone who took part and donated! 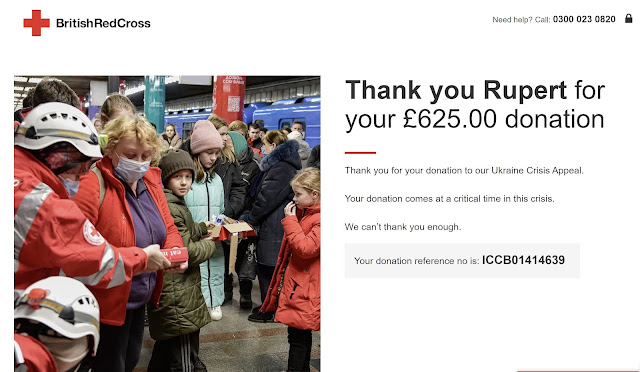 Posted by Rupert Preston Bell at 16:45 No comments: 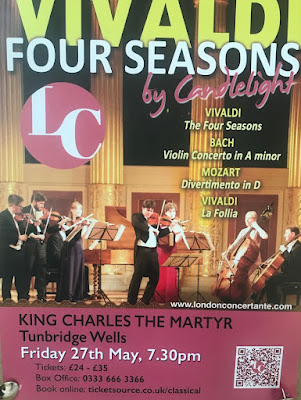 Friday 27 May, 7:30pm
Vivaldi, Bach and Mozart played by London Concertante.
Find out more and book tickets here.
Founded in 1991 by a group of graduates from London’s acclaimed music colleges, London Concertante has developed a reputation as one of the finest chamber ensembles in the UK. Its inspired programming, with repertoire from the Baroque to contemporary music, film scores to Viennese waltzes and Americana jazz to Argentine tango has led to both public and critical acclaim throughout its 30-year history, with past collaborators including celebrated jazz musicians such as Tim Garland, Byron Wallen and The David Gordon Trio, composers including John Tavener and John Woolrich and soloists including Giovanni Guzzo, Alexander Sitkovetsky, Mark Padmore, Michael Collins and many, many more.
Posted by Rupert Preston Bell at 08:13 No comments:

'The heavens are telling' Fundraising concert 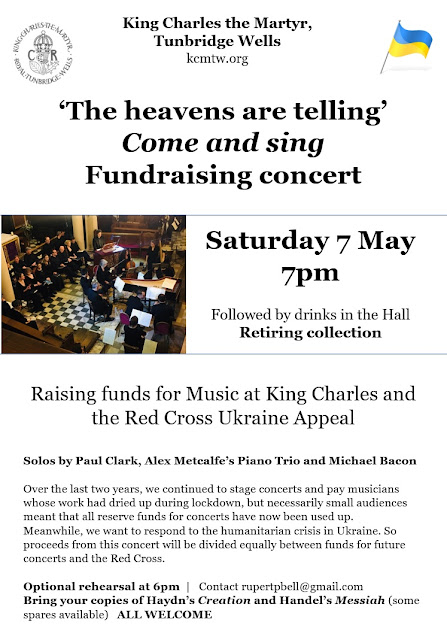 Come and sing choruses from Haydn's Creation and Handel's Messiah (bring your own scores if you can).

All welcome. Please come and help us support future concerts in the church, as our funds are completely exhausted after the difficulties of lockdown.

It will be wonderful to see friends and supporters for this informal occasion, followed by drinks in the hall. Please bring cash or card for your donations!

Posted by Rupert Preston Bell at 08:17 No comments:

About Music at King Charles